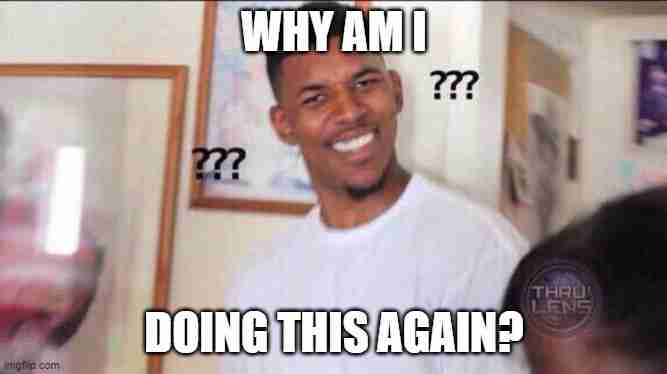 Once upon a time, a corporate innovator was having trouble bringing innovation into their organization.

No matter how hard they tried to guide the culture of the organization to be more innovative or convince leadership to invest both time and money into innovative new products, service and businesses, its seemed that no matter what effort was made, they were never able to go beyond “innovation theater.”

Innovation was a buzzword, a marketing term. Nothing more. The innovator was frustrated and said, to no one in particular:

“Why do I do this? Maybe if I stopped banging my head against the wall, its would feel better.”

This is the reality in most human-driven organizations. Very few humans like change. Very few humans are not lazy. Very few humans want to break things that are not broken to see if they can do things better. Most humans are creatures of inertia and habits – they want to keep doing what they are doing since they have been doing it this way up until now, and it seems to be working. So far. So why rock the boat?

This is why: the boat-rockers are the ones who can create massively beneficial things for the human race. Do you think Thomas Edison, Nikola Tesla, George Washington Carver, Marie Curie, Steve Jobs, and Elon Musk were creatures of inertia? On the contrary, their inventions greatly advanced the human race forward. They were boat-rockers.

But in your typical organization – boat-rockers are few and far between. You are probably a boat-rocker. But how do you help others to be boat-rockers too? How do you get them to move fast and break things? They need a few things:

I’m not going to sugar-coat it. Being a corporate innovator is a very tough job. It’s easier in some organizations than others, but it’s rarely easy. Changing human behavior is one of the hardest things you can do. Even if you see a little bit of success, you should be proud of the work that you have done.

Somedays, in fact, many days, you’ll probably think that you want to throw in the towel and just go back to a boring life before getting into the innovation space. But in reality – it’s exciting to build new businesses. It’s exhilarating to create new things. It’s fulfilling to see positive cultural change.

These are all hard things. But they are all important, and would you really wish you were doing anything else, despite the challenges? Not me. It might be tough – but we have to relish the challenge.

After all, we are trying to change the world.