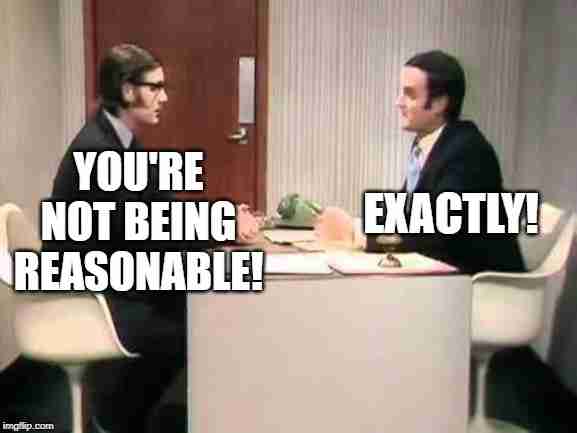 Let me ask you something: do you think that Steve Jobs was a reasonable man? Do you believe that when people came to him with their ideas, he listened to them and implemented everything that they presented him with?

While I never worked with him, none of his biographers say that he was ever that agreeable. In reality, he was a very unreasonable man – he’d push his teams mercilessly to deliver – he’d have such a firm belief that something seemingly impossible could be done that everyone around him started to believe that it could be done. He also famously used all sorts of tactics to manipulate those around him, from shouting to crying at the right moments and with the right people. Would you say that Steve Jobs was unreasonable? Yes.

A while back, I was into Transactional Analysis, which posits that all people are made up of three main characteristics – a parent, who has two aspects – authoritarian and loving, an adult, who is the home of reason and a lack of emotion – your Vulcan side so to speak – and a child, having 3 aspects, a sullen child, a playful child, and a mischevious child. The theory goes that we have all three of those types within us, and we exhibit one of those aspects whenever we communicate. When we are having trouble communicating, it because we are not responding to the other person in the right way – our lines of communication are crossed in any communication which is going wrong; its because two adults are not talking to each other. To communicate, you must bring both parties back into being adults. However, if the person you are communicating within is one of those other states, then you need to mimic that state as well (or its opposite state – for example, if someone is acting childlike, you need to respond as a parent to bring them back to being an adult. If someone is acting like a parent, you may need to play the child to connect with them to bring them back to being an adult.

Being reasonable is the last thing that you want to be when you innovate. Being reasonable does not bring out the most interesting forward-thinking innovations – but playing those other parts might help you unlock that innovation. If you are the type who is mostly an adult, then play a child (in any of the forms) and invent ideas as that child would. Or if that is too much for you, play the parent and let that mindset rule your ideas.

Either way, the task before you is to throw reasonableness out the window (I know its hard because many of us try to be reasonable all the time), but reason won’t help us innovate. Once you are done innovating, bring reason back when you execute.

Reason is required for reviewing and distilling the best ideas into actionable new businesses. It is the filtering mechanism. However, unless you go through the exercise of generating those out of the box ideas first by putting your reason on a shelf, then you may not capture the best, most exciting, and profitable ideas. To be an innovator, you need to be unreasonable, at least some of the time. When you think of the great inventors of the present and the past: Musk, Edison, Tesla, do you picture them as reasonable people? Then why would you think that being reasonable would ever lead you to innovation?

If you are looking to build and launch breakthrough products, then you don’t need to be reasonable, you need to be unreasonable. Being reasonable keeps you in the realm of incremental innovation, adding small new features and functions to a product until it gets so complicated and unwieldy that a whole industry has to be built around it (Microsoft Windows and Office anyone?) No, to make breakthrough disruptive ideas, you need to be unreasonable like Steve. You need to push the envelope, push yourself, and push your teams to do more. You can’t just step back and relax. No one ever built a massively huge new industry or company by being reasonable. You need that immense drive to succeed, the energy and passion for moving forward no matter what detrimental things occur, and the skills to make them happen (or at least partner with those who have the skills).

Being reasonable means being mediocre. Combine being unreasonable with demand, passion, and expertise, and you will be an unstoppable force.