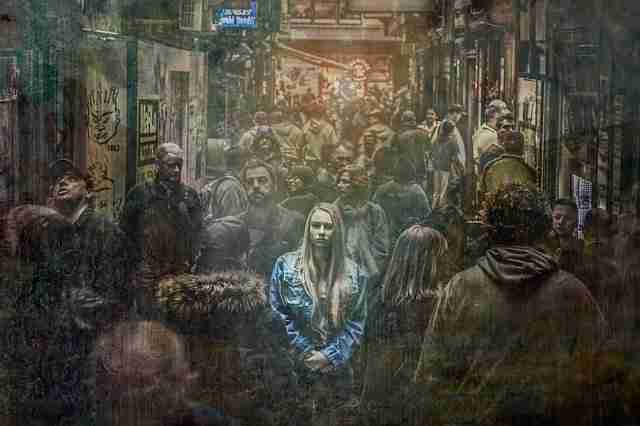 I think we all, deep down, know the answer to that question. Yet, we still hold out hope that humans can change their nature. We feel that since we seem to be intelligent and capable of change — that we have these big brains which allow us to think and feel — and to supposedly go against our programming — which has not changed since we stood erect — and that we can genuinely change our natures.

We do things like stop keeping score (even though we are competitive), ignoring our instincts (when we sense danger from the “other,” but we ignore it because we don’t want to be labeled racist or sexist), actively altering ourselves physically to match our supposedly new mental state (plastic surgery), and think that we can all work together to communally help each other in new kinds of social structures where all work equally towards the same goal (communism and socialism).

Yes, many of us feel that because of our higher status as humans — we are better than the rest of the animal kingdom, as we don’t work from pure instinct — we can suppress our actions and emotions as we move through life — we can “control ourselves,” “calm ourselves” and “strengthen ourselves” directly through mental action. In most of these instances — we use our brainpower to attempt to overwhelm our human nature.

In some cases, we seem to succeed; in others, we fail miserably. We are so sure that we can control ourselves with a simple application of brainpower. We have forgotten that it is not easy to change one’s inner nature.

Our nature is built into who we are — if I were to lose 50 pounds suddenly, then I may feel like I wasn’t me anymore. But what is this “me”? Many of the issues which are filling us up with angst today are generated simply since we deny our fundamental human nature.

Some of this is genetic, some are biological, and some is mental. All of these mental gymnastics hide the fact that A = A — we are who we are.

I started losing my hair relatively young — cursed with balding from the front on my father’s side, and balding from the back on my mother’s father’s side. But did I comb over my few remaining strands? Did I go out and buy a Shatner Turbo 2000? Did I run out for Minoxidil or one of those laser caps you see in in-flight magazines? No, I just accepted the fact of what I am, a balding man.

Much of what I’m saying has been covered at length in Buddhism — the world is full of suffering — dukkha — but the root of the suffering is the desire to be something we are not.

If we were to accept who we are — at birth — and the type of person we become — as an independent human — with all of the positives and negatives which come with being human — don’t you think that we could be happier?

Let’s try to reconnect with our essential human nature again, and instead of using our big brains to force ourselves into not being human, let’s use the fact that we are human to guide our future.

Much of the science-fiction I’ve been reading lately is about the far future, where humanity is so different from the humanity of today that they could scarcely be called the same species.

In this future, we can alter ourselves physically into any form, but our human nature stays intact. We need to learn that lesson today — human nature is our force for good — not something that needs to be wrestled into submission.

When designing a program or a workshop, you must create it to work with human nature and not against it. How many of your current and proposed programs work against human nature, and how could you change them to work better?