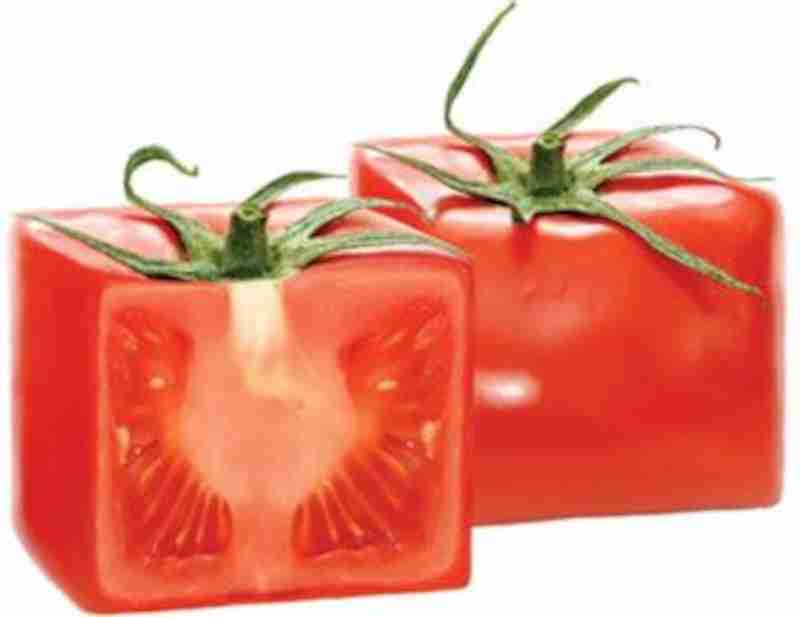 If you don’t, I forgive you – these was very forgettable experiments in the grocery space.

It seems that one day, an enterprising individual (or a few) were comparing the differences between packages, goods, and produce and were thinking about how the produce was in all sorts of weird shapes and sizes. They thought that maybe if they could create square tomatoes, that would be a great thing. The tomatoes could be packed more tightly for transport, presented more easily in displays, and could be sliced easier for including into a sandwich (after all, it isn’t a slice of bread square?). Sounds like a win-win for everyone.

So they undertook experiments to attempt to create square tomatoes.

Using a combination of genetic engineering and shaped forms, they “grew” the tomatoes into a square shape. The experiment was a total success.

This amazing innovation – they thought – would revolutionize the produce business. Who knows what other kinds of efficiencies could be developed. Plus, they figured that customers would be intrigued by the new fruit and want to try it. They developed practices to create the fruit – grew a bunch of it – and then went to market. What do you think happened to the square tomato? Considering that it’s no longer around (although forgive me if you live somewhere, they still make them), why do you think the square tomato never took off? Maybe for the same reason that “dessert hummus” and Homejoy never took off – did anyone ever ask if customers might be interested in them?

While it’s true that square tomatoes and dessert hummus were innovative – they only captured one of the pillars of innovation – they were new.

Sometimes, innovators are enthralled by the prospect of bringing something new to the market – and never factor the customer desires in the equation. Sure, there have been many notable successes that were birthed without customer desires factored in, but I would consider those the minority. Even those are generally designed from a customer perspective – what the customer wants – instead of enjoying what the innovator wanted – or even the business wanted.

Too often, we barrel forward with new ideas that we feel are innovative without bringing the customer into the conversation at the start. Customer input is essential to developing a product that is innovative and sticks – innovation without design thinking, and a solid business model may not be considered an innovation. After all, if a product innovative comes to market, then disappears the next day?

It may be innovative – but I think we can all agree that we are not only looking for innovation – we are also looking for profitability. This is not to say don’t experiment – it’s to say – experiment with the customer’s desires in mind. Of course, if these researchers had done this, we wouldn’t have had the failed square tomato’s example to learn from.

If you think about it, there are plenty of innovations that disappeared – for the same reason: it’s cool – but no one wanted them.

So yes, even in failure, we learn.